Without music there can be no dancing. It falls to the DJs, alone on the stage, to decide what tracks to play for those of us determined to have a great night out. It’s no easy gig for the DJs, for amongst the dancers on the floor are people with their own favourite tracks and a list of songs they wouldn’t mind if they never heard again.

But somehow, in a four hour freestyle, they have to find in the region of eighty tracks that will provide everyone with some great dances and memorable musical highs. They must take care not to play the same old – same old, and they need to differentiate themselves from their peers by playing something distinctive. They need to find something a little different, but at the same time tried and tested.

I thought it might be an idea then, from time to time, to focus entirely on the DJ and their choice of music and the way they mix it up, rather than the general attributes of the freestyle itself. My fourth review is of Mark O’Reilly who provided the tracks at Ceroc Heaven’s Freestyle at Kelham Hall, Newark last Friday.

Before I start, I have to congratulate Mark on his outfit. Mark is known for his sartorial flamboyance, and it always adds to the occasion. A sell-out crowd turned up to the freestyle at Kelham Hall. If DJs do get nervous, I wonder if they get any more nervous when so many people have turned up hoping for a great night of dancing. Mark is an experienced DJ, and has regular slots at the Southport Ceroc Weekenders. I have no idea whether Mark was nervous or not, but he got off to a cracking start by playing the upbeat remix of Leo Sayer’s Thunder in my heart again.

He then followed it with a little piece of Motown magic. Now you know I’m an advocate for DJs playing more Motown, so it was unfortunate that I was in the queue at the bar while everyone else was dancing to it. So please allow me a little indulgence if I embed it here.

What impresses me most about DJs is how much they mix up their music. Recent club tracks with modern jive classics. Upbeat periods broken up by slower tempo tracks. Something new with something we haven’t heard in an age or, even better, something we’ve never heard on the dance floor. And one more thing – something so fabulous it provides us with one of our best dances of the night. Mark ticked every one of these boxes.

Mark played just the right number of recent club hits, including Deorro & Chris Brown’s Five more hours, Jess Glynne’s Don’t be so hard on yourself, Years and Years’ King and Sigala’s Give me your love (still love the Nile Rogers’ guitar lick). These were mixed in with some of the best modern jive classics, including one of my all time favourites – The Tony Moran remix of Kenny G’s Havana.

When the music’s good, everyone wants to dance to every track. Friday’s packed dance floor was testament to just how good Mark’s music choice was. However, a great night out is not only about the dancing. Friday night was also about two hundred people enjoying the company of their friends, having a laugh, forgetting their worldly worries and just partying. Friday was a particularly joyous occasion and I think it was down, in great part, to Mark’s fabulous music choice. As always Tel Jenkins captured the joy of the occasion with his wonderful photography.

I’ve picked out just two photo’s from the many Tel took. If you want to see the full set please click the link to the Ceroc Heaven Facebook Page. 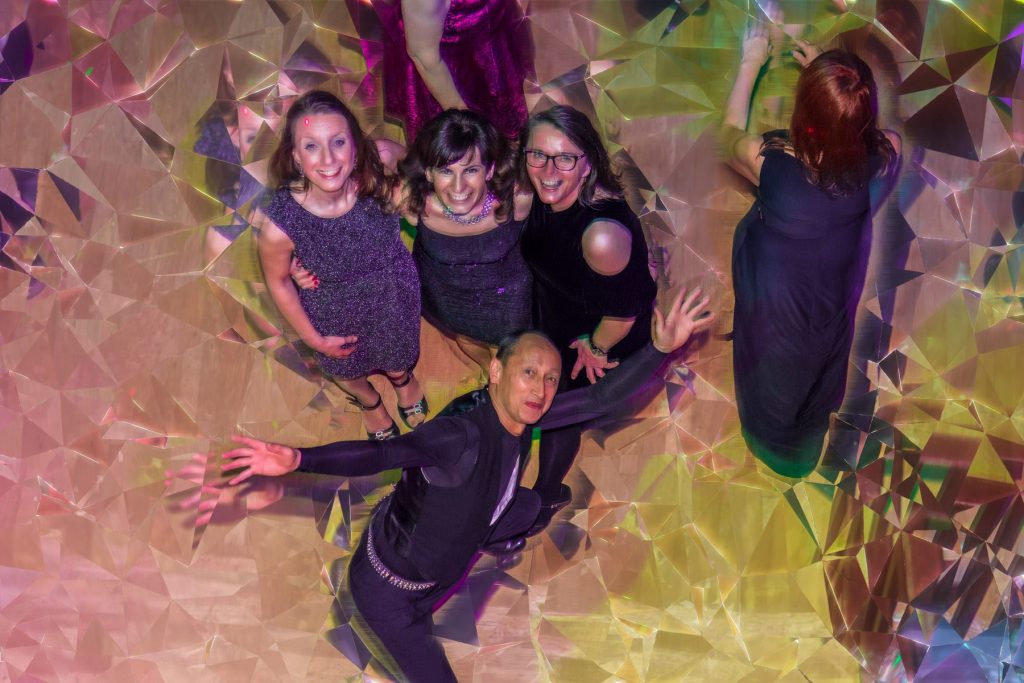 A great example of how Mark mixed up the tempo was the contrast between the hi-energy of Macy Gray’s Kissed it with what I think is a lovely gentle modern jive track – The Beautiful South’s version of Don’t fear the reaper.

I’ve got to mention a track that I’ve never heard before on the dance floor, but having loved dancing to it I hope that it gets a few more airings. It’s the Bee Gees You should be dancing. Another track, I can’t remember hearing before, actually gave me the best dance of the night. Its from the seventies too – a decade that gave us some of the best disco music ever, and one I wish the DJs would visit a lot more often. It’s Sylvesters’ You make me feel (Mighty Real). Even if you weren’t even a twinkle in your parents eyes when this lit up the discos of the 70’s, you surely can’t escape its infectious vibe. Please hit the play button and relive a part of the joy that was Friday night.

I occasionally complain that DJs play the Same Old, Same Old. However, that’s not entirely fair, because familiarity with a track allows us to connect with them on the dance floor making the most of their rhythm and incidental phrasing. Some of our favourites are tracks we have heard over and over again. Mark played one track that I love no matter how many times I hear it. I suspect that a lot of other people love it too, because the dance floor was packed. Dario G’s Sunchyme is a quite original piece of dance music. What we are dancing to is actually a remix (I doubt anyone remembers the original).

I love the way DJs put short groups of hi-energy tracks together. Three is usually enough – four might lead to physical melt down. Mark put a trio of tracks together that I’ve embedded elsewhere on the blog, should you wish to listen to them. For the record they are: Signed, Sealed, Delivered – a thumping version of the Stevie Wonder Motown Classic by Craig David,  Do I love you (Indeed I do) probably the best cross-over track from Northern Soul and the new version of September by Earth Wind and Fire featuring Justin Timberlake. This was a fabulous trio. Happily physical melt down, for me at least, was avoided as Mark slowed it down thereafter.

One of the tracks Mark used to slow the tempo was One minute to midnight by ZHU. This is a wonderful piece of music that offers dancers opportunities to really show off their musicality. It’s bluesy feel lends itself to the SILC style of dancing, and hearing this lovely track my New Year’s Resolution is to not give up on SILC

Another beautiful track Mark featured was Callum Scott’s Dancing on my own (See this weeks Quick Steps Posting for a topical mention of it).

I’ll finish by commenting on one last very funky track. This track was used in all the Ceroc Heaven classes this week. It was essentially used as a vehicle to get everyone wiggling and jiggling. It was the best fun in a dance class this year (I devoted a whole posting to it here). Mark topped off a great week of Christmas fun by playing it on Friday. On a personal note I and my partner had another go at the fun routine, and so did a fair few other dancers. Even if you can’t dance to it, it’s a great tune. Click the play button and I’m sure it will make you smile.

The variety, the classic tracks, and change of pace went on all night. My friends and the people I talked with about the music all came up with hugely positive comments, and I was very pleased to see Mark get a round of applause at the end of the night. We should not forget, of course, the hard work that the whole Ceroc Heaven Crew put in. I should also like to mention one special moment from the night. Mark paid tribute to his wife, in recognition of their twenty five years together, with the very romantic gesture of a red rose. Sue is a pillar of the Ceroc Heaven Team, and it was wonderful that Mark gave us all an opportunity to congratulate them.

About the Author: Paul Jeffery

A Modern Jive Dancer with a passion for Dance Music. In my Blog I hope to offer reviews of the music we dance to, and the Classes, Freestyles and Weekenders we love dancing at. I started dancing eight years ago at The Ceroc Passion dance class at Rolls Royce in Derby. I remember what it was like being a beginner and I always try to make the beginners classes now. I'm a great believer that we should support beginners through their first lessons, in the hope they will get the Modern Jive Bug. Disco dancing in the early seventies I became a lover of Motown and Soul music. During the next ten years I also got into Northern Soul and Funk. In the eighties my dance hero was Niles Rogers of Chic. I now dance at least three times a week in my local area of Nottingham, but also travel more widely around the country to write reviews of new venues. With my Soul Boy roots I'm an advocate for more Motown being played at Freestyles.